Note to a Twit, I Mean NYS Governor Paterson

On Tuesday, May 25, 2010, you sent out your plea to your constituents to understand and embrace your “new and improve” modified sugar sweetened beverage tax package of “one cent per ounce excise tax [to] be added to sugary soft-drinks, bottled coffee and tea drinks with added sugar . . .  [while] eliminat[ing] the sales tax for bottled water and low-calorie drinks that have 10 or fewer calories per 8 oz. sugar-sweetened drinks.”

Later that same day,  I sat and watched a morbidly obese woman eating a ginormous bag of potato chips for lunch. And what was she washing those greasy chips down with? A liter of Diet Coke.

I don’t deny that there is an obesity epidemic in this country, but Governor, c’mon. 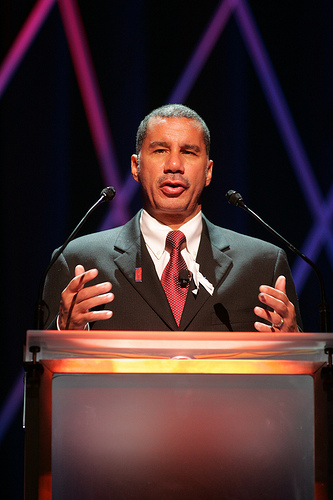 Photo by Todd Pitt/PictureGroup at Flickr.com

Your proposition is doomed to fail because the  premise upon which it rests is that in charging people more, you will somehow teach them to change their behavior. This is just like the cigarette tax. Did it stop people from smoking? Not so much: Nicotine fiends still find the money to get their smokes.

The same is true here. Fat or thin, people with poor eating habits will continue to make the same choices. No one is going to change his or her behavior because their favorite sugary drink costs a few extra nickels and dimes here or there. And I’ll let you in on a little secret: I know plenty of people who feel like because they drink diet soda they are earning “brownie points” – literally. Like the woman eating the bag of chips, I know folks who feel they can eat that extra slice of pie or that extra cookie because they are washing it down with diet soda. By gosh, they’ve earned it.

Oooh, I have an idea! Why don’t you tax items like chips, cookies, cakes, donuts and all fast food items in addition to sugary drinks. Yes, this is a good idea! Why stop with just the drinks? You aren’t thinking broadly enough.

Listen, a lot of us are fat. We know. It’s kind of hard to miss. But that isn’t really what this is about, is it? Clearly, the State needs money, right? Why be so underhanded? Just tell the good people of New York that you need to raise taxes, but don’t pretend to care about the obesity problem in the country. Seriously, you don’t think that taxing sugary drinks is the answer, do you? Or . . . do you?

6 responses to “Note to a Twit, I Mean NYS Governor Paterson”