While attending a fancy-schmancy cocktail party before a big party, a gaggle of women wearing our prettiest dresses formed a loose circle to catch up. I stood closest to four women. We talked about apple picking and how a Trader Joe’s would soon be opening next door to our local TJ Maxx. We admired each other’s shoes and accessories, smiled and posed for pictures.

A stranger in a tight purple dress broke into our circle, and turned to one of the women I knew.

“Will you get me a drink?” Tight Purple Dress requested.

I wondered why she didn’t get her own drink.

And then I realized Tight Purple dress was Apple,* the 10th grade daughter of the woman she was addressing.

Let me tell you, Apple did not look like a fifteen-year-old girl.

Apple had it goin’ on.

Apple’s mother shooed her away.

Because I am clueless, I didn’t know what the big deal was.

I figured if Apple was thirsty she could have a sip of my drink.

As I handed her my glass, Apple shot her mother a smug look. But after a quick swig, she pulled her mouth away from my drink with a frown.

“What is this?” Apple wrinkled up her face. “Sprite?”

“Ginger ale with lime.” I smiled, taking the glass back in my hands and jiggling it. “My signature drink.”

“I wanted…like, a vodka tonic or something.”

I shrugged and wiped her lipstick off the rim of my glass with a napkin.

Apple turned to her mother again.

Apple’s mother turned her back to her daughter.

Good for her, I thought. She’s standing firm.

Meanwhile, Apple inserted herself into every conversation, asking every woman in the vicinity to please get her a drink from the bar.

The proposition was not enticing. 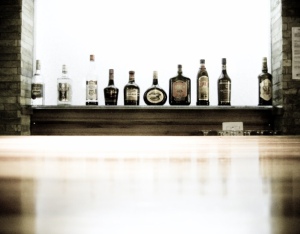 When Apple interrupted my conversation for the third time, I was pissed. Honestly, in that moment, I didn’t care if I made her feel less than.

I batted her away like an annoying little gnat. “Why don’t you go in the room with the DJ?” I suggested. “This is the adult cocktail hour.”

Undeterred, Apple flitted across the room where she found her father. I watched as he chatted it up with his buddies and, absently, handed his daughter his stubby glass filled with something.

I watched Apple polish off her father’s drink, and I tracked her as she made her way back toward her mother.

I figured she was sated.

Sucking on a piece of ice, Apple was relentless and started to beg again: “Mommy, will you get me a drink, now?”

Apple’s mother thrust her glass into her daughter’s manicured hand. “Take this and go!”

Women looked at their rings and adjusted their bracelets.

One woman caught Apple’s mother’s elbow. “What are you doing?”

“I’m doing what I need to do, so my kid will leave me alone and I can have a little fun.”

The circle broke apart then. Some women went to try the hors d’oeuvres that had been brought out; others went to find spouses. Some wandered toward the bathroom, ostensibly to check makeup.

And probably to chat about what had transpired.

I leaned against a wall, processing things.

When it comes to parenting, we do the best we can.

And raising children is not easy.

We all make decisions we wish that we could take back.

Meanwhile, I have watched this dance between Apple and her mother for a decade.

So where does this leave Apple?

Will she be a good Apple? Or rotten to the core?

Kids are programmed to test the limits set by the adults around them.

But that’s when the adults in their lives are supposed to push them back and remind them where the boundaries are. You know, when they overstep.

So why do parents get stuck on the reminding about the limits part?

Who cares if your kid hates you for a little while?

And Tech, if you are reading this if you suddenly feel the urge to drink something alcoholic while under the legal age, you probably shouldn’t come looking to your father. Or me.

You can have as much ginger ale as you like. Bring your friends.

How would you react if your child asked you for alcohol in a public venue? Do you believe it is better to provide alcohol for your child (so you can oversee things) or that it is more important to uphold the law? Do you think Apple’s behavior is indicative of an emerging drinking problem or just harmless adolescent attention seeking? Am I over-reacting?