The Perils and Delights of Raw Meat

"Indulgence of the Flesh" by 4T9R @ flickr.com

“You’re not really going to eat that, are you?” a friend asked me just as I was about to bite into a fabulous piece of very, rare filet.

As a little girl, whenever my father would barbeque, he would always let me sneak a few little pieces of meat off the grill long before they were ready to be served. Charred on the outside and raw on the inside; that was the taste of summer.

In the years before microwaves, when mothers had to decide what they were making for dinner by breakfast each morning, my mother would sometimes put out hamburger meat and, if I was lucky, by the time I got home from school, she would have fashioned them into seasoned patties, ready to go into the oven. In super stealth mode, I would sneak into the kitchen to snatch little bits of uncooked burger from the porcelain plate where they waited to be broiled. I think once I actually ate an entire  burger – raw. This was frowned upon by my mother but not seen as dangerous or cause for grave concern.

My immediate family knows I am a carnivore. To this day, I have a taste for raw, red meat, and I totally gross out my husband. People are always telling me that I am going to get E.coli or trichinosis or salmonella or staphylococcus or some other creepy bacteria that I can’t see or smell. 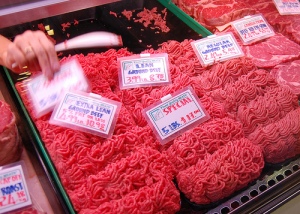 I can’t even disagree with the people who tell me this. I know that E. coli 0157:H7 are like super-bacteria and have managed to mutate so that they survive refrigeration and freezer temperatures and, once in food, they can multiply quickly. People delight in telling me I am being stupid and stubborn, and if I would only agree to cooking my meat just a little more, the bacteria would be killed.

I know the FDA recommendations. People tell me I am tempting the food gods. All I can tell you is in a report issued by the Centers for Disease Control and Prevention in 2009, there was a drop in the cases of E. coli 0157 and that it struck “fewer than one case per 100,000 people” and they are clear when they point out that “death is rare.”

Maybe someone should have told my mother 40 years ago that she shouldn’t have left the burgers out at room temperature for more than two hours because, honestly, it was really just delicious. I never got sick. Not even so much as a stomach ache.

People can speak to me about animal cruelty until the cows come home. (Ooh, that is probably a bad choice of words to use here.) And seriously, I am not unsympathetic. I have seen videos of the inhumane ways that cattle have been slaughtered, and it is awful to watch. Truly gruesome. I like to believe the kosher meat that I purchase is prepared a bit more carefully, but I’m not positive that this is the case. For a little while I tried not to eat red meat, but I fell off the wagon with my folk and knife poised over a gorgeous slab of prime rib.

All I know is that I survived my father’s raw steaks, my mother’s raw burgers, piles of steak tartar, 15 years of sushi (some served at restaurants of questionable repute) . . .  and on a tangential yet not completely unrelated note, as I’m sure you can imagine, I absolutely, positively always lick the bowl that held the raw cookie dough. And I’m still here.

15 responses to “The Perils and Delights of Raw Meat”