Teacher’s Pets: It’s Not What You Think 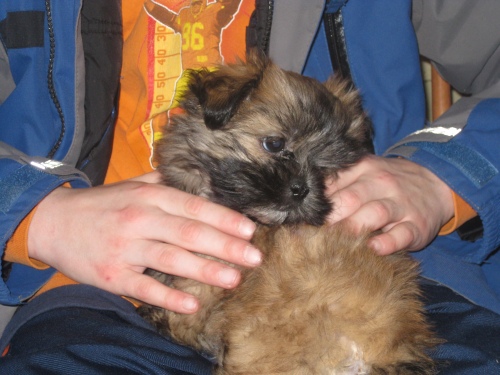 Last year, at exactly this same time, we got a dog. The world was white and unbearably cold, and getting a pet seemed like a wonderful idea. We were dogless and surrounded on all sides by barky-barkers. We figured, how hard could it be, if everyone has them? Hubby researched carefully, making sure to find a breed that would be a good fit for our family.

Meanwhile I went to the breeder with my friend Cindy to meet “Lloyd,” a yellow Labrador puppy who was soon to become part of her family. They don’t make ’em cuter than that, folks. He was freakin’ adorable. But I also remembered how two summers before she’d brought home these two freaky Wheatland terriers, and she hated them. Hated. Them.

“Do they smell? I feel like they smell,” she kept asking.

I swear Cindy lost 10 pounds in the few days she had those dogs, and they quickly went back to the breeder.

Around the same time, I’d been following the trials with another friend’s new puppy for nearly four months — and it sounded like hell. All his Facebook status updates sounded like misery. Eventually, he returned his Labradoodle to the breeder. I had recently read Marley and Me, so I was nervous about lineage and more than a little anxious about making sure to pick the right dog from the litter.

I expressed my concerns to my husband who reminded me that I had successfully babysat my sister-in-law’s adorable shih tzu, Roxie, for two days.

“And I enjoy Brian — the cartoon dog on The Family Guy.” I quipped, “Can we find a witty, talking dog?”

Anyway, I told my family I was really nervous about this decision. I told them I’d never had a dog, that I didn’t really want a dog, but my husband kind of wore me down, promising that he would help with everything. He would pick up the dog poo every day. He would feed the dog. He would change the water. He would play with the dog. I wouldn’t have to do anything except enjoy him.

I know people love their doggies like family, but I kept thinking of them as eternal babies and I couldn’t figure out how we would ever be able to take a spontaneous day trip ever again. Everyone kept telling me I was just nervous about the unknown. I don’t think that was it at all. In fact, I think I knew too much. For example, while discussing the whole concept of getting a dog, I was at a friend’s house, when her Maltese got the “Hershey squirts” all over her rug.

And when Noah (a good-natured yellow Lab) came to live with my friend Betsy, he promptly swallowed a hair accessory and it was barfity-barfity-barf all the way to the vet. Another friend’s dog compulsively ate socks and had to have several emergency surgeries. Another friend’s dog kept getting foot infections. One of my brother’s dogs had weird phobias and tore through doors during thunderstorms. And, of course, we had all these barky dogs surrounding us – which could be a little unpleasant. Did I really want to own a dog?

I decided if Hubby wanted a puppy so badly, he would need to make the action steps, so I took one giant step back.

Because the next thing I knew, we had a 4-month-old shih tzu. And while Hubby had said he would “do everything,” he simultaneously decided that first weekend home with the dog would be the perfect time to take a long weekend to go golfing with some buddies in Florida. So Hubby left me at home alone for four days with our brand new puppy — Mojo — who, to be fair — was a quick study about doing his business outside. But it should be noted, he didn’t seem to mind peeing or pooping inside, and he especially liked chewing on his feces after the big dump, so one had to be quick to catch him in the act.

After two weeks, I couldn’t take it anymore. Our son had stopped coming in the kitchen to avoid Mojo, who liked biting Monkey’s toes. So I asked my son, point-blank, if he would be sad if I brought the dog back to the breeder.

“Well,” he said cautiously, aware that he was operating between the clashing wills of his two parents. “I wouldn’t be particularly unhappy about it.”

This was not the voice of a child who loved his dog. There was no crying, no begging, no bargaining.  I told Hubby I would no longer be picking up “poopsicles” in sub-zero temperatures, informed him that I had called the breeder and was more than 100% prepared to lose my Mojo.

There are several good parts to this story and this is where they start: First, I did not have to bring the dog back to the breeder. My husband’s brother and my sister-in-law, who live less than 1/2 mile away, said they would love to have a second shih tzu, and I was delighted to give them everything. That. Very. Minute. So Mojo was renamed Rubie, and their dog, Roxie, got a sister, and Hubby still gets visitation rights. The dog still eats his poop, but they are way more mellow about that than I was.

Fast forward one year. Almost to the day. Hubby calls me and tells me to come to Petco.

Hubby: “I think you should come to look at some aquariums for Monkey’s room.” 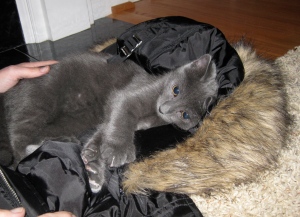 Hemingway in my coat – 4 months

When I walked in, I saw Hubby holding not one but two gray kittens. I almost died. I have wanted a cat for my entire life. In fact, right before I met Hubby, I was about to get a cat, but when I mentioned my plans, Hubby said he thought he was allergic, so I never followed through. I figured the whole cat thing was never going to happen.

Somehow we wound up with Hemingway, an all gray, short-haired, polydactyl cat, which means he had nine million pads on his paws. (Really, he had seven pads on each of his front paws — fourteen big fat pads, which he kneaded softly against my chest or leg or arm.) He was purr-fectly purr-fect in every way. To me, he was better than a dog because he loved to be cuddled and held and hugged — and he always went in his litter box, so none of us had to go outside in the bitter chill of winter. Hemi loved to chase ping-pong balls and wadded up balls of paper and string. He seemed to love us, and we all fell in love with him. He greeted us every morning for two weeks with a happy “meow,” and I was content to sit and read with him on my lap, his mutant paws draped lazily over my arms, the constant purr of his “motor” was always turned on.

Hubby started scratching. Initially, he complained about his eyes feeling like there were pebbles underneath his lids. But by the end of the day, the pebbles had become boulders and — much as we tried to deny it — it was obvious: Hubby was, in fact, allergic to cats. And, of course, we were all devastated when Hubby had to bring Hemi back to Habitat for Cats, as we’d all become very attached to the little guy.

They say some folks are dog people and some are cat people.

Sadly, I guess we are the people who can’t be either.

“Maybe we can get some cool fish,” I said trying to cheer my rather glum Monkey.

“I’m tired of the pet drama,” said Monkey, “Knowing us, our heater would accidentally boil the fish.”

So, for now, we are back to our former petless status.

But it is a little sad.

Maybe by winter 2011, we’ll be emotionally ready to consider a goldfish.

Somebody, tell me your own pet drama to make me feel better.

This entry was posted in Family, Memoir and tagged allergic reactions to cat, animal lovers, Cat, Cat Lovers, Cats & Dogs, deciding which pet is right for you, Dogs are not for everyone, education about animals, Family, parenting and pets, Pet, pet dramas, Petco, Pets, Polydactyl cat, Recreation, self-discovery, when you can't own a pet. Bookmark the permalink.

34 responses to “Teacher’s Pets: It’s Not What You Think”