Lessons From An Only Child & Three Dead Fish 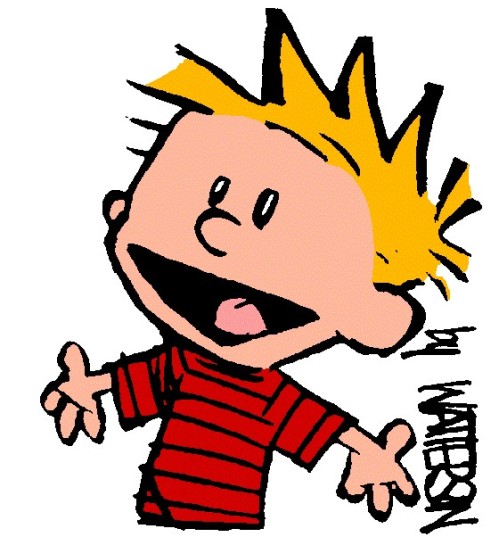 Calvin is an only child

Problem is, the dude is dead.

About 120 years ago, Hall established one of the first American psychology-research labs and supervised the 1896 study “Of Peculiar and Exceptional Children,” which described a series of only-child oddballs as permanent misfits. Hall concluded only children could not be expected to go through life with the same capacity for adjustment that children with siblings possessed. “Being an only child is a disease in itself,” he claimed.

And by rock, I mean suck.

While much work has been done to debunk the myth of the weirdo only child, most people still think one is the loneliest number. And, shockingly, strangers continue to ask me, over 10 years after my son was born, when I plan to have another. As if having just one is the worst, most unthinkable thing I could ever do.

You’re hearing it here first, folks: I’m not having any more kids.

The womb is closed.

Meanwhile, Hubby and I are doing our best to raise our singleton son, now 11 & 1/2 years old, and we think we are doing a pretty good job of it. I was recently thumbing through a journal that I kept when Monkey was very small, and I stumbled across an anecdote that seemed apropos to share here.

When Monkey was about 3 years old, he won three identical goldfish at a carnival. Actually, he didn’t win them so much as acquire them; the man at the booth said it was late in the day, that it was the last day of whatever festival we were attending, and he basically wanted to unload the fish. So when Monkey’s dart popped one balloon he became the “big winner” of the day and we came home with a plastic baggie o’fish.

Monkey promptly named the trio the best names he could think of: “Mommy,” “Daddy” and “Monkey.” And he fed them (sometimes). And he watched them swim (sometimes). And he disappeared when I cleaned the bowl (always). And for a while, things went along swimmingly. The fish were nice to have, but he didn’t seem very invested in them.

One morning, hubby and I awoke to the sound of Monkey screaming, “Mommy! Daddy! Mommy! Daddy!”

Husband and I jumped out of our bed and ran down the hall to find our son standing on top of his bed staring into the fishbowl.

“Mommy and Daddy are dead,” he announced.

Now these were three completely identical goldfish. There was absolutely nothing to tell them apart. no telltale spots, no interesting marks, no places where anyone had been chomped, so I had to ask.

“Monkey, how can you tell that it’s Mommy and Daddy that didn’t make it?”

My son looked at me like I was an alien. “Well, because as you can see,” he said, pointing into the tiny little bowl, “Monkey is right there. He’s fine.”

Hubby and I looked at each other. Our child didn’t seem to be traumatized. In fact, when we asked him what we ought to do with the two fish that had gone belly-up, he replied pragmatically, “Probably flush ’em.”

Like most only children, Monkey has hung out with his cousins and turned his closest friends into pseudo-siblings, knowing it’s not the same as having real brothers or a sisters but not necessarily missing what he doesn’t have. For him, siblings are kind of like the floating goldfish we flushed away so long ago: they were nice while they lasted, but he prefers having the bowl to himself. He has seen siblings who get along beautifully, and he has watched siblings claw at each other like cats. He realizes that just because a person has a brother or a sister doesn’t mean that relationship will be a close one. These days, he also knows that being an only has its perks: No one will mess with his many collections, or go in his room to snoop around, or kick him unexpectedly in the twigs and berries. But he couldn’t have known this back then.

The day the fish died, my husband explained the bowl had been too small, that there had been too much urea in the water and not enough oxygen. He asked our son if he wanted to get a bigger tank, more fish.

Recent studies show that only children are no more messed up than anybody else’s kids. In fact, only children tend to do better in school and get more education — college, medical or law degrees — than other kids. Source Material

So everybody can stop worrying.

The only kid is all right.

Where do you fall in the birth order? Has birth order impacted you? Do you think birth order matters at all? Or is it all a bunch of hogwash?

52 responses to “Lessons From An Only Child & Three Dead Fish”