In Praise of the Pencil 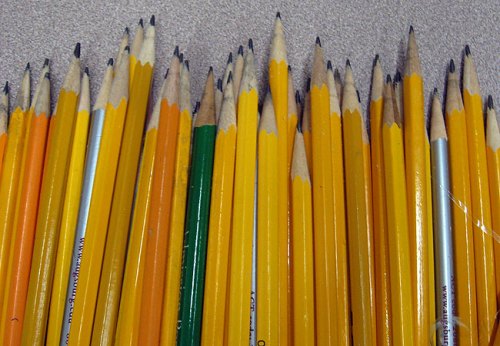 In 5th grade, Mr. Zych lectured all of his students about how to properly sharpen a pencil. He wasn’t messing around. His speech was not short, and he covered everything from how to properly grip the pencil to the cranking motion – how it should be smooth and continuous, not jerky. He even discussed the perils of over-sharpening, which could lead to premature tip-breakage. Mr. Zych turned pencil sharpening into a science.

Personally, I have had a love-hate relationship with pencils. I first learned how to print my alphabet in pencil and then I learned how to write in cursive in pencil. That was Paradise. Finally, a way to write all the stories stored in my head. Later, I preferred to write with pens – preferably ones filled with purple or green ink. But ever since my son started school, he has been forever in need of pencils; they seem to always be around, and so I returned to the yellow pencils of my youth. I had learned to appreciate the feel of a pencil in my hand again. I even started to like the scratchy-scratchy sound of the graphite as it dragged across the page. After I recently stepped on a pencil, I became suspicious of them again and switched back to pens.

Meanwhile, my son is still on a steady diet of pencils. In middle school, the kids seem to devour them: literally and figuratively. I know my son nibbles on his; I’ve seen the teeth marks. I’ve watched him crunch while he contemplates before committing to writing an answer on paper. But sometimes I wonder if he actually eats them, too. I mean, where do they go? How many pencils does one kid need in a school year?

A few weeks back, Monkey came home in a tizzy.

“I’m out of pencils again,” he announced.

Nonplussed, I told him there were under three weeks of school left and that I was pretty sure he could make-do with his nubs until June 20.

He started at me with contempt.

“Are you serious?” he questioned. “I have exams! I need pencils! Ticonderogas. Now!”

He was not messing around.

The next day while in the grocery store – to my horror – I found plenty of office supplies, but they were only generic pencils. And even I know that those erasers don’t do the job. You need another eraser to get rid of the smears those lame pencils leave behind.

So I made an extra trek, this time to Staples – home of the Ticonderoga pencil – and invested in the Bulk pack. (Because that was all they had.) Let’s be clear. Ticonderoga pencils are like platinum. They cost a fortune. The only way a pencil could be more fabulous would be if you printed your name on pencils. A Ticonderoga is the Hum-V in the wonderful world of pencils. Teachers definitely prefer them. Definitely.

I rationalized that I could spend $15.77 + nearly 9% tax on pencils because they are non-perishable, so it is not like they will ever rot or mold. And I figured whatever is left at the end of the school year, Monkey can use in 7th grade, thus saving me some back-to-school shopping hassle.

A few days later, a good friend of mine called me and reported that her son – also a 6th grader – had run out of pencils. While requesting to buy more, she said my name was invoked. Apparently her son said:

“Can you just be like Mrs. J. and get the Giant Pack of 72 Ticonderoga pencils?”

Apparently Monkey had been bragging about his new stash.

I laughed at the sheer ridiculousness of it. Bragging about pencils?

And then I thought about how I had come full circle. Just one week before, I was cursing pencils as my husband dug around my heel with a needle in an attempt to get the lead out. (I know, I know. Pencils are made of graphite. I was going for the funny.) But now I found myself saying a silent prayer on behalf of all pencil-loving children everywhere. Uncharacteristically, I clasped my hands together and thought to myself:

May he always be addicted to Ticonderoga pencils.

Because, honestly, I’ll happily help Monkey score his Ticonderoga pencils forever. I’ll even help him sharpen them. Mr. Zych schooled me on that a long time ago, and I feel confident I can help my son with his #2 pencil fix without any need for an Intervention.

65 responses to “In Praise of the Pencil”