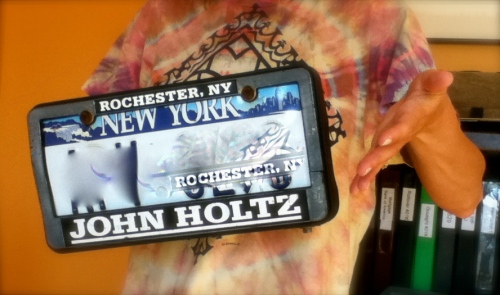 Well hello, July. That was a fine ass-kicking you gave me.

No, I am not talking about fireworks. That would be cliché.

And I am not talking about that other kind of bang either, you pervs. Seriously, get your minds out of the gutters!

To start July right, I got into a car accident.

First, everyone remain calm. It was a minor fender bender.

I was at a stoplight. Yup. Not moving at all.

Red means stop and I had done stopped.

When the light changed, I slowly moved my foot towards the accelerator.

And that’s when the grey car in front of me came flying backwards and slammed into the front bumper of my car.

I shifted into park and jumped out of my car — as did the driver of the other vehicle.

ElderDude was about 128 years old and kind of hunched over.

“What happened?” I said, maybe a little too loudly, but I was competing with traffic.

“I think I accidentally shifted into reverse,” he said, shuffling his feet a little.

I didn’t understand how that could be possible.

To be honest — and completely ageist — I also couldn’t fathom why a man over the age of 100 would be driving a stick-shift. Was he out trolling to pick up the ladies?

So there we stood, like The North-Going Zax and the The South-Going Zax from Dr. Suess, those two furry creatures who bump into each other and refuse to budge from their tracks.

(Only we were much less angry and much less furry.)

Anyway, we just kind of stood there in the middle of the intersection.

Foot to foot. Face to face.

I asked ElderDude if he wanted to exchange information.

He inspected his rear bumper. It was a little scratched. His license plate was a little dented, but otherwise perfect.

I looked into his old man’s eyes. They were blue. Like ocean blue. Like really pretty ocean blue, like the kind of oceans you see in documentaries where the ocean is just gorgeous and you want to hop in and take a swim.

“I don’t think we need to exchange information,” ElderDude said. “As long as you’re okay with it.”

One day I will be 100 years old, I thought to myself. And I will do something stupid. And it would be nice — assuming no one is injured — if that person could just forgive me for it.

So like a fish dangling from a line, I let him go. It was catch and release, and I threw him back. I mean, he was just a little, kyphotic fish. Feeling good about my decision, I got into my own car and followed ElderDude down the road until I eventually turned left and he drove off in his sporty, little gray car.

When I picked up Monkey after a morning of swimming, he took one look at my Honda and asked, “What’s that thing hanging off the front?”

I went to inspect.

And dagnabit if my license plate wasn’t gone.

What can I tell you? I can’t find a good metaphor.

It’s clear to me now what happened. ElderDude hypnotized me so I forgot basic accident protocol. Hubby says this is ridiculous, but I was definitely momentarily blinded by blue.

Monkey and I returned to the scene of the crime where a good Samaritan had stuck my license plate on the median next to some pink flowers that looked a little wilted.

I think they were pansies.

I also think it’s going to cost eleventy-bajillion dollars to get my license plate bolted back on my car.

Have you ever tried to do something nice but then have it come back to bite you? What’s the story behind the most expensive car repair you’ve ever had to make?

30 responses to “An Unexpected Bang”