The Gift of Magic To My Son Away at Summer Camp

For those of you who read my blog regularly, you know, he’s not home.

I wasn’t planning to write today, but my sister-in-law happened to be at camp earlier this week when she unexpectedly ran into our son. Knowing she had only a few minutes to chat, she asked him to tell her what he wanted for his birthday. He shrugged and he said something like “I don’t want anything. The two things I want my parents are already getting me.”

This was my response:

Because I had no idea.

Also, I had no plan to send anything to Tech for his birthday.

I knew from his previous summers at camp that Marilyn, the chef, would make him a chocolate cake to share with the other kids in his bunk.

I figured that was enough yummy frosted birthday goodness.

I asked my sister-in-law if she knew what Tech was talking about.

I couldn’t help it. I called the camp and asked the assistant director to see if she could squeeze some information out of our kid.

A few hours later, I received a text message.

Poor thing. To her ears, it must have sounded like my kid was speaking in tongues. I can imagine Tech waving his long arms and yammering about “life points” and “damage” and “mana”.

The boy who graduated from LEGO to Minecraft has a new addiction: Magic: The Gathering.

From what I understand, Magic is a card game that involves battles between wizards (“planeswalkers”) who use spells, items and creatures depicted on the cards to defeat their opponents.

Apparently, Magic appeals to math lovers. And it involves more complex rules than most other card games.

Why am I not surprised?

Of course my kid would love a game with tons of rules.

And he loves math.

I can’t believe the game hasn’t been featured on The Big Bang Theory yet.

All I know is when we walked into Millennium Games and Cyberstorm Lounge last night (the equivalent of the comic store where Sheldon, Leonard, Howard and Raj hang out), Hubby and I were the only people without pierced septae.

{septae? that looks weird. but you know what i mean, right?}

Anyway, we were painfully uncool.

{or possibly we were the coolest people in the room}

Because we were 100% illiterate when it came to Magic. 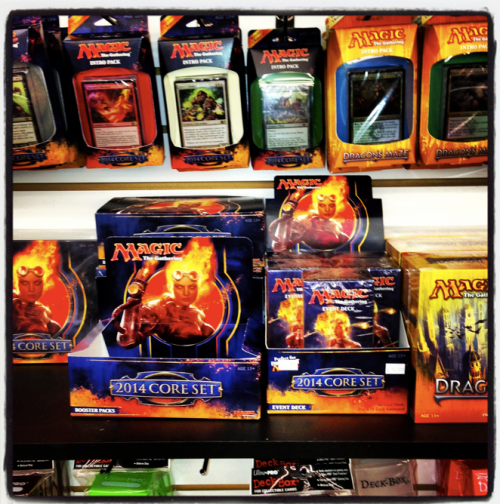 Luckily, the kind (and uber patient) people at Millennium Games were more than happy to school us.

Thanks to them, I now know:

Our package is en route to our son. He’ll get it later today.

Tech rarely asks for anything.

More than anything, I hope my son’s friends make him feel special today. Maybe the staff will sing to him over the PA system and make him skip around the room.

Hopefully, he’ll have chocolate cake with his bunkmates.

And hopefully, our kid will kick butt with his lightly played Chandra the Firebrand card.

What unusual gift requests have you made/received?

This post was not sponsored; however, I imagine I’m going to be spending a lot of money at Millennium Games over the next few years, so if they’d like to offer me a discount, I wouldn’t complain.