November Mash Up of Awesomeness

Wanna see something awesome? Okay, so see this picture below? This is a picture of this thing that is in my classroom this year. It is a representation of this way cool gizmo that I have that integrates a camera, an overhead projection system, a computer with Internet access, a DVD player, or any other auxiliary source I might want to plug into — like an iPod or a laptop or…  an 8-track cassette. (Ha ha, that’s funny. But seriously. If I wanted to. I could do it.)

This is in my classroom!

Wanna know what else is cool? The bloggers listed below in my November Mash-Up. They are new. They are now. They are what’s goin’ on.

From the English Department

TheGoodGreatsby is hilarious with his Take a Sip Punctuation. Because we really do need something to indicate a written paraprosdokian. Duh.

Kristen Lamb tells us how to plant the right seed and keep ourselves focused by writing a great logline.

KLamb also reminds newbie writers that a plot doesn’t have to be complicated to be good in Getting Primal and Staying Simple.

When TamaraOutLoud lost her voice, her family turned her silence into a game in Don’t Say Anything If...

From the Meth Department

Psyche. I said “meth” not math. EllieAnn Soderstrom delivers an awesome satire on Why Meth Dealers are the Best Boyfriends. Hilarious. And no math involved.

From the Home Economics Department

Julie C. Gardner gives validation to all writers in her piece Today Call me Half-Assed. Clearly, Julie understands that when folks are focusing on their craft, something has got to give. And sometimes that something is the house.

Kelly K from Dances with Chaos is in the kitchen And she has a Top 10 List of Things a Newbie Cook Should Know.

Galit Breen from These Little Waves has a lovely piece that rolled in about the same time as soup weather. Her post, My Kids Hate Matzo Ball Soup, comes complete with a fabulous recipe.

From the History Department

Gene Lempp weighs in with his Zoo Arcane –  Evil Little People where he explores malicious dwarves from Africa and Southeast Asia. Creepy and brilliant all rolled into one.

Piper Bayard tells us everything we never knew about Josephine Baker in She Wasn’t Really Naked: Dancer, Singer, Spy

Jami Gold explores the ongoing controversy about whether folks should consider e-publishers vs. agents

From the Physical Education Department

From the Art Department

Mary Mollica can turn chicken shit into chicken cordon bleu. She’s magic, I’m telling you. Check out what she does with an old table she found at the curb in How About a Game of Checkers?

Mark Kaplowitz wrote My First Grade Teacher Must Have Had Stock In Crayola — so, it is a post on unintentional art.

From the Music Department

Steve from Brown Road Chronicles wrote a romantic song for his wife to celebrate their anniversary. I want As Long As You’re With Me on my iPod. You know, so I can cry in my car.

From the Awesome Department 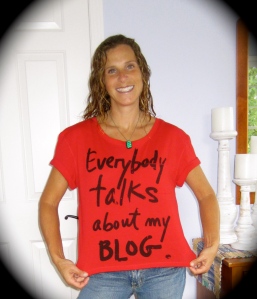 Do I have the best neighbor or what?

My neighbor Teri bought me this shirt. Don’t you all wish you had neighbors who did stuff like that?

Also, I was Freshly Pressed this week! Whoo Hoo! If you missed how my 12-year old son no longer wants to be called a certain name on zee bloggie, check out Monkey Has Left the Building.

Being Freshly Pressed is always a wonderful surprise, and it brings such tremendous gratitude. I would like to welcome my many new subscribers. *waves hi*  I hope you like what you see here and that you will participate in the conversation. I do my best to visit people who comment. And I always comment back.

Finally, I should also mention that it is Veterans Day today — at least in the United States of America. We, in our higher institutions of learning, do not have the day off from school — but my son does. So on behalf of all the awesome Veterans who have selflessly (and repeatedly) served our country, please know our flag is flying in your honor. I know it is difficult to come back home after being away, so I am wishing awesome things for each and every one of you.

What awesome stuff has happened to you recently? 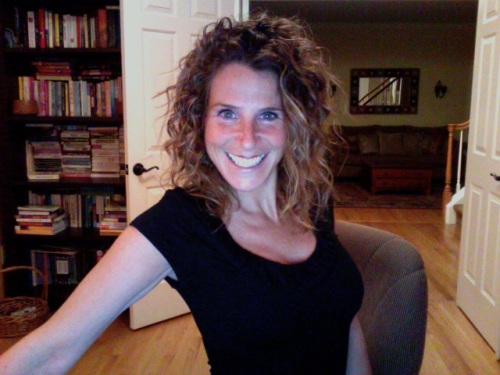 I said I was taking a break from blogging to work on my book.

I must not have been very convincing because the next thing I know, I received this message from Clay Morgan over at Educlaytion: “I have something for you over at my blog.” Well, for the love of Pete, that’s like crack. I mean, how can anyone resist that? You would have to have to be one cold-blooded bitch not to heed the call of a fellow blogger.

So I popped over to Clay’s blog and found an honor bestowed. 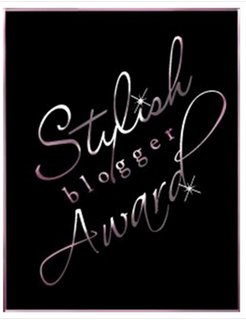 Clay has passed along the esteemed Stylish Blogger Award.

I’m told that in order to accept The Stylish Blogger Award, nominees must do the following:

I started looking around the blogosphere, and I have to say I’ve seen many variations of this theme. I’ve seen folks asked to name ten things about themselves (Can you say overkill?) and name fifteen other bloggers (Glurg!). So I decided that with this shiny, happy, and slightly imaginary award comes a little lee-way, so I’m going with the six-pack.

I’m giving you all six things about me that are mildly titillating and then I’m passing the torch to six people whose stuff I love to read. In fact, some of them may have already have received this award, but I’m throwing some traffic back at them. Because they are THAT good.

Okay, so six things about myself:

1. SK sat behind me in fourth grade. On the first day of school, I said I had a pair of blue flip-flops at home, and he said they were actually called “thongs.” From then on, we disagreed about everything. These days, I have a lot of thongs at home, but I don’t wear them on my feet.

2. In 3rd grade, I had a mad crush on a kid named Savallas. He could turn his eyelids inside out. He called me on Saturday mornings and we sang K.C. and The Sunshine Band songs together.

3. My first kiss was with a girl. And she liked it so much she became a lesbian. True story.

4. Somebody wrote in my high school yearbook: “May your tail fall off and your hair shrivel into snakes. I’ll never forget you.” His handwriting is completely illegible so I can’t read the name. I’m pretty sure he (or she) has forgotten me.

5. I am extremely competitive, and I have never “let my child win” at anything. Not chess or tennis or Crazy-Eights. This might be why he has taken up fencing; I do not own a sword.

6. I am not afraid of anything, except contracting lice and not getting my manuscript published. Either of those things would totally suck.

Now for my six nominees to be forever immortalized should they accept this honor (and by honor, I mean, homework assignment disguised as an honor).

Chase McFadden of Some Species Eat Their Young – I will have to fight Clay over who discovered Chase first. (I swear it was me.) Chase is pee-in-your-pants funny. Seriously, I think I’ve actually had to change my pants after reading some of his posts. A must-read for dads who blog.

Valerie Stone Hawthorne of Mompetition – This chick is a hoot. She makes parenting a competition. And when it comes down to it? Isn’t it? Really? Check out her photographs. She manages to capture a whole blog’s worth in a picture and one snarky caption. (Damn her!) Plus her electronic videos are a hoot.

Worst Professor Ever – She won’t reveal her name. And after a while, you don’t want her to. I love WorPro. She is my hero. She came, she taught, and she got out alive. She is hot as a blister in the sun, sharp as a whip, tough as nails, and smart as a Bermuda bag in The Preppy Handbook circa 1982.

Zach Sparer of Faux Outrage – One of my former students, Zach is a hot, young, Jewish lawyer. He is funny and smart. He is also single and living in the D.C. area. What? This isn’t J-Date? Fine. Strangely, Zach and I have a lot in common. We both attended the same summer camp – though we missed each other by about 20 years. We also share a disdain for the man who subbed for me while I was out on bed-rest during pregnancy. (That man destroyed The Great Gatsby for over 125 students. Unforgivable.) Zach sees the world through sassy glasses – literally. Except he doesn’t wear glasses.

Kasey Matthews is an old comrade of mine from high school. I think we double dated for Senior prom. (Didn’t we Kasey? Shall I look for pictures?) Anyway, she has just started blogging, and her stuff is the stuff that moms wrestle with all the time. She has a new book coming out called Premature Journey: Lessons in Love, Life and Motherhood, and I can’t wait to read it.

Kathy English of Mom Crusades – What else can you say? Kathy is consistently funny, on topic, and spot on. She is incredibly prolific. I don’t know how (or when) she does it. All I can say is that her house had better be really, really messy!

Now back to the trenches.