It all started when I found a gray hair in my ski helmet.

My response was completely rational.

“Who has been wearing my ski helmet?” I asked my husband who responded by laughing at me and telling me that the one in the helmet had some friends. On my head.

So I made an appointment to get my hair colored. I would have to wait eight weeks for my appointment. Okay, fine. Whatever. Make me suffer. Fine.

Not my child, but doesn't he look sad?

On the day of my appointment, Monkey was barfing. I mean power-puking. It was crazy.

I had a twenty minute drive to make it to the salon on-time. I couldn’t believe it. In the almost twelve years he has lived on this planet, my child has probably missed two days of school due to illness, total.

Monkey laid on the couch with a blue bucket at his side.

I looked at my watch. I thought about what I should do.

I sighed, realizing I had to do it.

I had to go to the salon.

(For God’s sakes, I had eight weeks of roots! Don’t judge me!)

He nodded and gripped the toilet.

“Here’s the phone,” I said, putting the cordless at his feet. “You know my number, right?”

The wintry roads were slippery, but still I zoomed off to Isobel. Pulling into the parking lot, I heard my phone ring. I checked to be sure it wasn’t Monkey. (It wasn’t.) I ran into the salon where Michael, the owner, welcomed me with a firm, “You’re five minutes late. Did you see I called you?”

I explained to Michael that I was the worst mother in the world. That I had left my barfing, sick child at home to get my highlights done. And Michael agreed, I was a pretty bad mom. But seventy-five minutes later, my hair was perfect. I paid for a job well-done and zoomed home.

While sitting at a stoplight approximately one minute from my house, my phone rang. “You left your wallet wide-open on the desk at the salon,” said Stephanie, a stylist at Isobel.

“Are you serious?” I asked, knowing, of course, she was serious.

I turned my car around and headed downtown. Again. Somehow, I got lost. I don’t know how I got lost, but I did. Maybe it’s because the entire city was cloaked in white so I took a wrong exit. Then, there were no discernible signs only lumpy shapes. Whatever. I finally made it to the salon and pulled my car right up to the door. It wasn’t really a parking space, per se – but I figured I was running in for two seconds and running back out. I had to get home to Monkey.

I turned off the ignition, opened my door, swung my clunky boots around, when – suddenly and simultaneously – the entire car shook and I heard a loud thunk-crunch. Turning my head, I saw another vehicle had smashed up against my rear bumper. (This was soooo not my day.)

And that’s when I noticed him. Looking to be about twenty years old, and wearing sagging jeans and a hoodie, he shuffled around to survey the wreck. “Ohhhhh mannnnn.” The guuy who had just plowed into my car spoke very slowly, like the way Spicoli spoke in the movie Fast Times at Ridgemont High. (For you young’uns out there, Spicoli was a major stoner.) 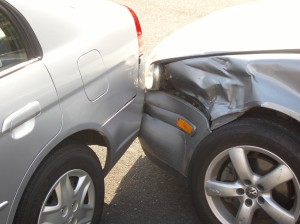 Not the real cars involved.

I drive a Honda Pilot. My vehicle is tall and black (and currently filthy). It’s not fancy, but it is tough. I looked closely at my bumper, which had absolutely no evidence of damage. Spicoli drove a kind of small, purplish (and might I add uber feminine) Hyundai which now had a dimple in it. And by “dimple,” I mean, his car was crushed like a paper fan.

“Thiiiiiis suuuucks,” Spicoli said, pulling the flaps of his Guatemalan hat down over his ears. He looked distressed. “Man,” says Spicoli. “I’ve had like… two other accidents in the last six months… I don’t want my insurance to go up any higher.”

“Well,” I said, trying not to sound too impatient, “there is no damage to my car, so we don’t have to report it.”

I told him I was going into the salon for a minute and that when I came out, he could tell me what he wanted to do. At last, I dashed into the salon and grabbed my wallet. Michael made some pithy joke at my expense, but I was already gone.

“So…um…” Spicoli stuttered, “if you are okay with it, can we not report this?” Spicoli asked. “I mean, my car is totally drivable.”

I nodded in agreement. Then Spicoli apologized, shook my hand, and told me I seemed like a nice lady.

Meanwhile I thought guiltily: Nice ladies don’t leave their sick children at home while they have their hair done.

I drove home carefully, certain that every police officer was out, ready to give me a ticket. And when I was pulled over, I would have to confess that my 11 year old was at home, alone and sick. And then Monkey would be hauled off to Child Protective Services. I visualized my husband screaming at me and then getting a really hot divorce lawyer.

Except none of that happened. After the garage door opened, I parked the car and hurried into the house to find Monkey, still resting on the couch. I pulled off my mittens and puffy black coat while I cooed, “Hey, Monkey… how are you feeling?”

I touched my son’s forehead. Cool as a cucumber. (Thank goodness.)

Tugging the hat from my head, I grabbed an extra blanket and covered Monkey from chin to toe. Then, I sat down beside him on the couch. Glancing at the clock, I saw it had been over three hours since I had left him alone.

“Do you need anything, buddy?” I asked, trying hard to make up for my hours of neglect. “Some tea?”

Monkey shook his head and kind of closed his eyes.

In that moment, I thought about what I had done. I had left my sick child when he needed me. Sure, I wanted my hair highlighted, but clearly some cosmic power seemed to be punishing me in a major way for my actions that morning, and I silently promised that if my li’l dude ever got sick again, I would put him first absolutely. Yes. Because he is that important to me. And I want him to know that he is loved and be the one to comfort him when he is feeling down and out.

And you know what? It did. It really did.

Care to share any low parenting moments? Or just judge me in mine? It’s cool. I can take it.