On Marriage & Changing My Name: An Unusual Anniversary Post 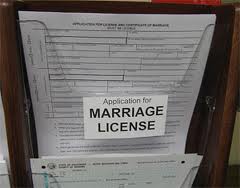 The woman behind the counter looked at the diamond studded watch that squashed her wrist, making it look like a fat sausage. She drummed her fat fingers against the counter top. She was in a hurry, and I was holding her up.

Though my fiancé and I had been engaged for eighteen months and I had more than ample time to think about it, talk about it, and make that decision, it wasn’t until we actually went to get our marriage license twenty-four hours before the wedding that I realized I could no longer defer reality. I had to make a choice.

Part of me wanted to keep my last name.

“Schuls” is the Americanized version of my grandfather’s Polish name. But it is hard to pronounce and no one ever spells it correctly on a first try. Still, it is my family name, linking me to my parents and my brother.

Anxiety prickled as I thought about my nickname?

It would be strange not to be RAS anymore.

I briefly entertained the idea that a new convention should be created where the man and the woman take a new name, perhaps join their names, and blend them in the name of holy matrimony. I proposed “SHAKE-OB-SON” and “JEWELS” to my fiancé, telling him we could go down into history like Elizabeth Cady Stanton and Henry Stanton who forever changed the institution of marriage by omitting the word ‘obey’ from their marital vows.

“We can be innovators, too!” I told him, grabbing his arm.

My fiancé laughed and called the idea ridiculous.

I pouted and wondered why I had to give up my identity.

Why I was the one who had to sacrifice, hassle with changing social security forms, medical records, credit cards, magazine subscriptions and insurance forms.

But the other part of me.

The other part of me liked the idea of being lost in love.

After all, I loved the guy.

I bit my lip and considered; it would be easier to spell.

The woman’s click-clacking fingers tapped faster, faster. A line had formed behind us.

I stared at her watch and felt time move too fast and too slow all at once.

Two other couples waited patiently to fill out their forms: other women had decided these things already.

And taking a breath, I said aloud it for the first time: “Renée Ann Schuls-Jacobson.”

Then I signed the papers, knowing that no one would ever say that whole mouthful.

It doesn’t fit on a my driver’s license.

Or any of my credit cards.

And my students call me Mrs. Jacobson.

Would you encourage your daughter to keep her own name or take the name of her spouse? If you had to do it again, would you do something different with the names thing? Or just make fun of our picture. Whatever floats your boat.