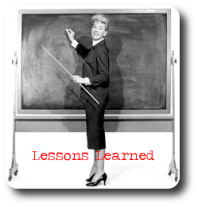 David N. Walker’s blog Where The Heart Is is a tribute to the things he holds dear: his family and his faith. David is the supreme patriarch; a warm father and grandfather, he gushes about his children and grandchildren.

In Texas, they have that saying: “Go Big Or Go Home.” In the piece below, you will see David was trying to Go Big and Go Home.

I’m happy to have David here today as he shows a bit of his humorous side. You can follow him on Twitter at @davidnwalkertx.

Everyone knows it’s important to read and pay attention to signs giving directions when driving. I mean, that’s too obvious even to comment on, right? Uh, not so fast there, Kimosabe.

My wife Sharon and I had spent the night in a Jellystone Park Camp-Resort that was convenient to Niagara Falls. After a delightful time at the falls and surrounding attractions, we got back to the motor home early to get ready for bed. We wanted to get an early start the next morning to get past Buffalo’s traffic rush before it started.

As soon as we got on the Queen Elizabeth Way headed for the border, we realized we weren’t the only ones who thought about beating the traffic. I don’t know what this artery looks like between 7:00 and 9:00 a.m., but it was plenty crowded even at 5:00.

Borders mean gated stops, right? We expected that, but we were amazed at how much traffic was backed up trying to get across. Glancing at the length of the lines in front of the various gates, I picked the next to farthest one to the right—a fortunate choice as it turned out. The only one farther to the right had several trucks in it, so I figured I’d get through quicker in this one.

Little by little I inched forward, one car-length at a time. When it was my turn to pull up to the attendant, I suddenly realized my motor home wasn’t going through that gate. Apparently I had missed a sign directing all  motor homes, as well as truck, to the right-hand gate, which was wider than the others.

What now? You don’t just throw a motor home in reverse when you’re pulling a car. No way the car will back straight. Besides, there was traffic behind us and in both lanes beside us.

As I pondered what to do, the Border Patrol agent came out of his booth and walked back to my window to tell me I was in the wrong lane. DUH!! Such useful information! I wanted to tell him I already had a wife to point out the obvious, but I decided not to antagonize him any further than I already had.

He told me I’d have to back up and move over into the right lane. I told him I couldn’t back up because of the tow car.

Have I mentioned there was traffic? About 10,000 unhappy drivers around and behind me. The nicest ones were just laughing at my predicament. Others were honking, and I’m sure there were a few single-digit waves.

I finally told the Border Patrol guy—who was being extremely nice, considering the circumstances—that I needed him to direct enough traffic out from behind me to allow me to back up. Meanwhile, Sharon would get in the car and steer it to keep it straight.

After a bit of organizing, we finally got ready to deal with all this. Mercifully, there was a lull in the truck traffic, and I was able to pull into the wide lane without further messing up anyone’s morning. The Border Patrol guy actually waved and smiled as I freed his lane to move once more.

Lesson Learned: READ THE SIGNS! They’re probably there for a reason.

Have you ever found yourself in trouble because you didn’t pay attention to the signs?

20 responses to “Motorhome Mayhem: A #LessonLearned by David N. Walker”