How Facebook Reconnected Me To My Ex-BoyFriend’s Wonky Groove 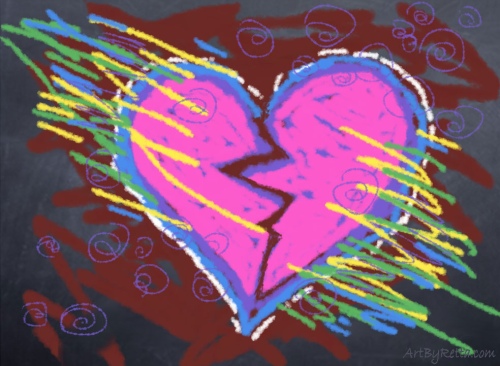 Not long ago, I received a private message on Facebook from a stranger who turned out to be one of my ex-boyfriend’s ex-girlfriends.

This woman expressed concern that her ex – a man I used to live with – might be unstable, perhaps dangerous, and she hoped I could provide her with some background to help her understand what had happened in my now twenty years dead relationship.

I remembered the good things first.

How he brought me flowers and played with my curls. How we’d hiked and biked, ridden horses and picked wildflowers. How he gave me heart-shaped rocks.

How he made me feel.

After someone else had left me broken.

We played house in a rat-infested shack.

We went to university, learned our professions well.

But one day, he accused me of eating all his peaches.

And the next day, he stopped listening to my poetry.

He went out late and came home later, smelling of beer.

I learned he slept with another woman.

When I decided to leave, he came home as I was gathering up my last box of things and shoved me against a wall.

With his hands pressed against my shoulders, he shouted too close to my face. “You promised you’d never leave!”

Then he slid to the floor.

Because I knew it was a trap.

He’d always used my words against me, twisted things around to make me feel like I was in the wrong. I was tired of being the bad one.

He followed me outside to my car. It was summer, and he stood on the hot driveway wearing shorts and wool socks as he leaned against my open window.

“I can’t believe you’re leaving me.” His long eyelashes were wet. “You’re just like everyone else.”

I remembered I’d left my purple and green tapestry inside, but I decided he could have it.

Because I wasn’t going back.

Alone in my new apartment, I mourned the death of our love. I remembered how he begged me to stop taking my birth control pills. We’ll make beautiful babies together, he had whispered in my ear as we laid together on our futon in the dark.

Somehow I knew his words were wishes, not promises. They were just words without rings or commitment attached.

Somehow I knew to get out.

In the Facebook message from the ex-girlfriend, I learned there is a collection of women who have been wined and dined, then made to feel small, cheated on, and dumped by this same man.

If this is true, it means that for decades, he has brought one woman after another into his home. That he has fathered children, but abandoned their mothers.

Because I’d always said if he couldn’t find happiness with me, I’d hoped he could find it with someone else.

And I was sincere when I said that.

But it sounds like he is still tortured by the devils that were chasing him when we first met, that he has become the person he said he would never be.

I also learned I have a bit of a reputation.

Apparently, I’m “The Smart One Who Got Away.”

And that is partly true.

I did get away.

But I hate hearing that this man is broken, a scratched up record with the needle stuck in the same rut, and that this wonky groove is still the rhythm of his life.

And I hate hearing that he is smearing women against the sky.

I have often reveled in the wrongness of things.

Growing up, I cut Barbie’s hair and pushed straight pins through her ears.

I told people I was making earrings, but mostly I wanted to make holes in Barbie’s face.

As a teen, I gravitated toward recklessness. Once, on vacation with friends, I disappeared on the beach to kiss a boy whose name I didn’t know. My friends were mad, but I chose the taste of cigarettes and beer on a stranger’s lips over my own safety.

For a while, I was in an unhealthy relationship.

We had an understanding.

I mean, he created the rules.

And he meant well, I’m sure, with his flattery and charm.

When he touched me, I swooned with gratitude.

Because he knew how to make me feel.

Not too long ago, I ran into this person.

Though he had aged, I remembered his dimple, how easily he could undo me with a word or a look. And I was surprised at how, after all these years, my body still responded to his touch.

I watched his mouth move and remembered the place where confidence collided with arrogance.

I saw how little he had changed.

I know he believes he is a good person.

But I know him to be a juggler who thrives off secrets and lies.

A person who craves power and uses people as playthings.

For a time, I allowed myself to be part of his secret life.

Allowed myself twice to be used and discarded.

In an odd way, seeing this person again helped reaffirm the treasures that I have at home.

Things that should not be trivialized.

It’s funny. I don’t crave recklessness the way I used to.

So while I enjoy more than my fair share of double-entendres and flirtations, there are places where I draw the line.

Danger paired with exhilaration can feel something close to love.

Ever run into an old flame? Someone who was not good for you? What was that like? Do you revel in wrongness? How far are you willing to go?

This week, writers were asked to use this photograph to inspire our post. My piece is a hybrid between fiction & non-fiction. We had 450 words. I got it done in 386.