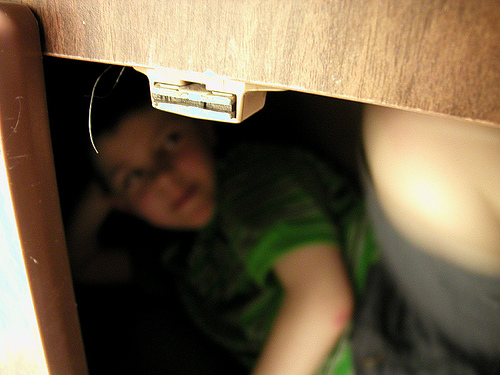 "boxed in" by massdistraction @flicker.com

I am a pretty organized person. In fact, there was an eight year stint where I worked as a professional organizer and was paid to go into people’s homes and help make systems to create order out of the chaos that surrounded them. And I was really good at it.

Truth be told, I am supremely organized. I used to lie about my house being as neat as it is. It doesn’t look quite as fabulous as the homes in Style Magazine or House Beautiful, you know, where everything has been staged to perfection – the beds heaped with fluffy, organic linens with a thread count of two million and smoothed so they 100% lump-free; every knick-knack is interesting and placed at the proper angle; the glass in the picture frames on the side tables sparkle, and the familes in the frames sparkle too.

It’s not like that here. Things here aren’t perfect; I just know where my stuff is.

Except when I don’t. Because that happens sometimes.

One night, around 10 pm, while I was folding laundry and my husband was out enjoying a Jeff Beck concert, my son apparently realized he had lost his book, Pendragon: The Quillan Games, (#7 in the series) somewhere at school. Pendragon is not a book he checked out at school; it is a library book. A thick, hardcover library book. Apparently, he laid there in the dark perseverating. You know, that thing we do that gets us absolutely nowhere except more freaked out? He was running “what if” scenarios over and over in his head, trying to figure out where he might have left his book, even though he thought it was probably in his desk. Alone in his bedroom he was thinking, What if I can’t find the book? What if it’s really gone? What if I left it on the playground? What if the library charges me three times as much as a new copy would cost. What if my parents get really mad at me for losing the book and don’t trust me and won’t let me take out any more library books? (For a voracious reader, that would be a major punishment.)

Apparently, he tortured himself like this for about thirty minutes before he finally exercised the good sense to come downstairs and explain his dilemma.

My child is the responsible type. He doesn’t like to lose things. He doesn’t like to miss deadlines or due dates. The thought is abhorrent to him. I understand this – apples don’t fall from pear trees, right? – so I was glad when I was able to share something with him that a friend of mine helped me with not too long ago with when I was freaking out about something insignificant, that seemed really big at the moment.

I asked my son to sit on the floor beside me, to close his eyes, and listen to my voice. I told him I was going to take him to the worst case scenario: His worst fear. 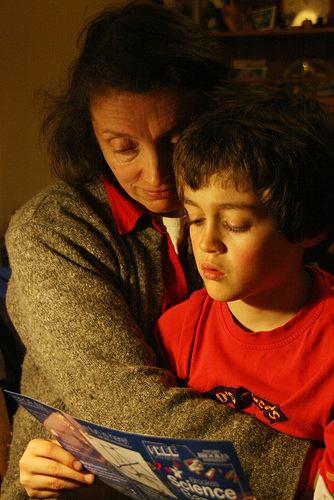 photo of "mother and son" by pcgn@flickr.com

“The book is, in fact, lost. You will have to pay for the book, maybe even three times the price.” Then I added this part: “But you are okay. You aren’t sick. We are all healthy. You have dad and me. We have a home. We have food and clothes, and we love you like crazy.”

He was calmer. Quieter. It was working. (Plus, he was really tired.) And because he was being quiet, I added, “And just so you know, assuming you live a long time – and I hope you do – you are going to lose stuff. A lot. It happens. I lose things all the time. I write notes to myself on slips of paper and they disappear. I don’t know where they go. I lose bills and receipts. Bottom line is, you have to know that you are going to lose shit, and you have to know it’s not worth losing your mind when you lose something.”

Drawing on sage advice from my friend Jennifer Hess and her children’s yoga practice, I asked my son to take a deep breath, take in as much air as he could, and then exhale as if he were blowing out a million candles. At first, he couldn’t do it. He felt stupid, he said. But I insisted that he keep trying. He got it right on the third try.

Walking upstairs together, he let me hold his hand – something he doesn’t always let me do these days.

I hope he gets it: That adults aren’t perfect. We can strive to be organized and have our perfectly-perfect systems, but nothing is fool-proof or fail-safe. The important thing is to have the perspective to understand that what feels so terribly, awfully, overwhelmingly, miserable at one moment can be dealt with and the awful feeling will pass. Even when it is a big something – the loss of a friendship, a major illness, even death – these things have to be dealt with calmly too. Freaking out doesn’t help.

That night was about a lost book.

That night I counted our blessings.

Afternote: Boy found the book at school the next day. It was rescued just as it was about to be sent back to the public library. All’s well that ends well. He is now well into Pendragon Book #8.