I’m in an airplane.

I’m stuck on an airplane right now as Clay Morgan opens the polls for Day 4 of his Second Annual March Movie Madness Contest.

I picked Ferris Bueller as the movie protagonist that I am prepared to fight for.

Because Ferris knows how to be a friend.

He knows how to sweet talk his parents, the lunch lady, and the school nurse.

Because he is smooth.

He knows how to work the system.

Only Principal Rooney, Ferris’s nemesis, doesn’t appreciate the gifts that Ferris bestows to the world.

Even his sister, who claims to hate him, comes through for Ferris in the end.

So why does everyone love Ferris Bueller?

Because he is on a universal quest to have fun.

He takes risks: not dangerous ones.

He does the crazy, silly things we wish we might be brave enough to do.

It is that kind of ethos that will always triumph.

Sure, Ferris is a rich kid who has almost nothing to complain about.

And guess what? He doesn’t.

He helps his friends overcome their fears.

He shows them love.

And a good time.

He reminds us all to cherish every moment of every day.

And this is why you have to go over to Clay’s blog and vote for Ferris right now!

The polls open at noon.

I don’t even know who Ferris is up against.

Do it for the little, geeky rebellious part of you that aspires to do something a little naughty.

And say something nice to Clay while you are there!

Look at the brackets. Who do you think is going all the way? IYKWIM. 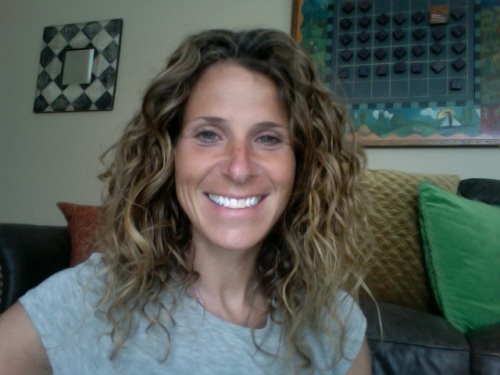 This is me on any given day.

From the second the movie came out, people have told me that I look Jennifer Grey from Dirty Dancing. You know, “Baby.” It happens all the time. In reality, my cousin Michelle is the one who really looks like Jennifer Grey. Like exactly. 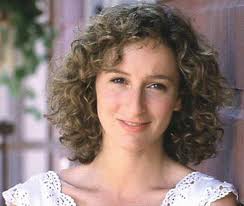 But I can see why people think I look like this incarnation of Jennifer Grey. We’ve both got the mouse blonde-brown hair and the curls that were hot in the 1980s — and if mousse hadn’t been invented, I would still be stuck with all that frizz. Mousse has been very, very good to me. When it gets humid enough, I probably do look like the 1980s Jennifer Grey, but I don’t want to have to keep doing this.

The other person people tell me I look like is Sarah Jessica Parker (after her mole was removed). I don’t mind having people tell me I look like SJP because I think she is stunning. In fact, most women I know think SJP is stunning. It’s men who complain that SJP is decidedly un-hot. I once heard someone say SJP’s face looks like a horse’s. Well, I love horses, and if my features are equine, I’m good with it. 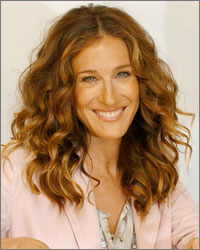 To be true, I don’t really think I look so much like SJP in real life as I behave like her character, Carrie Bradshaw, in Sex in the City. You know, I dress really funky; I collect fabulously expensive shoes, and let’s not forget, I live alone in my tiny, expensive New York apartment without a husband or son.

Except that I live in the suburbs in Western, New York. You know, with my husband and son. Oh, and I hate to shop and I have maybe seven pairs of shoes.

Still, I get the SJP thing a lot.

I recently saw Ironic Mom (aka: Leanne Shirtliffe) was playing around with a fun app that shows you your celebrity doppelgangers, and I decided to try it.

Here are the results: 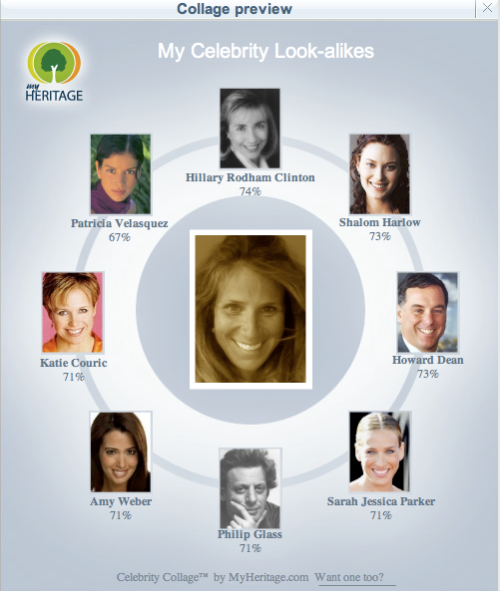 Astoundingly, SJP did come up. Along with a lot of other very attractive women, so I am not complaining. But apparently, I look much more like The United States Secretary of State, Hilary Rodham Clinton than anyone else (74% match) — a woman who is 20 years older than I am.

That said, I think Hil looks smokin’ in that picture.

I was surprised, however, to see that I also came up looking like Howard Dean and composer Phillip Glass (look at that man’s nose, people!).

Those kind of hurt a little.

So, like Leanne, I decided to try the experiment again using a different picture. This time, I selected a photo of my curly haired self, since I am usually a curly girly .

Here are the results: 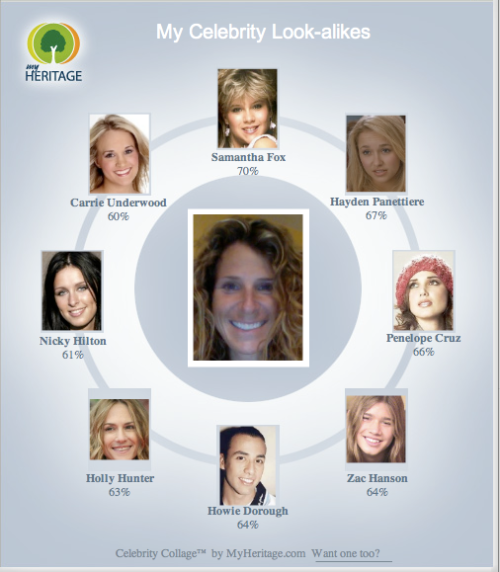 I would call this my “I wish” list. Omigosh! I wish I looked like Penelope Cruz. If I did, I’m thinking I would be much more famous. And Nicky Hilton? I don’t think I have one character trait in common with Nicky Hilton, so that one leaves me with a big question mark over my head.

Holly Hunter is probably a pretty good doppelganger on the day-to-day. In this picture anyway. She looks like she just finished walking with a friend on a really humid morning or, perhaps, went swimming and let her hair air dry. Yeah, that sounds like me.

And, I suppose, if I have to be a guy, Howie Dorough (eldest singer of the Backstreet Boys) or pop singer Zac Hanson aren’t the worst boys to look like. I mean, at least they’re kinda pretty.

I wanted to run this app all day long using different pictures of myself, but I had other stuff to do. And, of course, what is the point? No one will ever tell me I look like Katie Couric, and I don’t think anyone under 35 even knows the name Samantha Fox! Oh and as far as Amy Weber goes, yeah right! 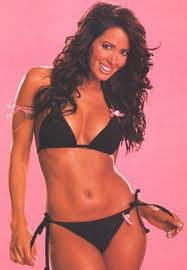 Yeah, this is definitely what I look like in my bikini.

My identity was confirmed at the grocery store last night, when a stranger stopped me in the frozen food section and said, “Wow, you look just like the girl from Dirty Dancing! You know, Jennifer Grey. Before she got her nose job!”

And — as Homer Simpson might say — that brings us back to doh!